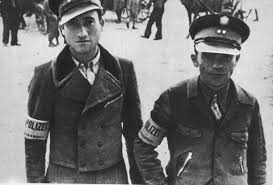 During the II World War in Polish Kozova, nowadays Ukraine, the Jews were exterminated by Germans. Before this fact there had existed a Jewish ghetto. To save their lives the Jews from Kozowa were forced to pay twice in money or gold. After this fact, the Germans demanded a payment again, but the Jews had declared they were not in a possesion of any precious things. So about 7 German soldiers had surrounded the whole community of Jews (in Kozowa there had been about 2000 Jews in a ghetto), and escorted them to the place where they were shoot in the back of the head. My grandfather Piotr Wójtowicz saw this. In this situation the Jews could have fought with Germans, but they didn’t. They had a superiority in numbers, but they still did nothing. A couple of days after this accident, the bodies had started to swell and stink. Therefore Germans got calcium and given it to the bodies to eliminate the smell.

Before the II World War my grandfather had lived in Kozova. In his life he had mentioned the fact that many of the Jews were different, some of them were rich, but many more were poor and breathed out the smell of onion. Many Jews had been eating potato pancakes with onion and starving at that time.

When my grandfather had been forced into the labor for Germans, before he had escaped with brothers, my grandmother hid his Jewish colleague in their house. But any foreigner reading this text, should know that if my Grandmother had been catched by the Germans, then all of my family would have been killed. Polish nation couldn’t have helped the Jews like other countries, because they would have been punished to death. Remember also that another danger came from the Ukrainians, and Russians.

Grandfather had also mentioned that the Jews were not the lowest rank soldiers, because they hadn’t been allowed to use weapon under foreign commandment, so as a result they have had higher ranks or had never joined the army.